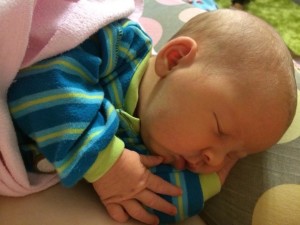 At 33, Merewyn had already been saving a “baby fund” for some time, as she contemplated becoming a Choice Mom. She had a master’s degree and related certificates in her field, a well-paying job that seemed stable enough, and was told that as a child she was the most stubborn of her mother’s six children.

Earlier in adulthood, when she was 25, she had what she considers a mini life crisis, realizing it had been awhile since she’d been in a relationship — and what was she going to do about her desire to have kids someday? She decided then that she’d take steps to do it on her own when she was 35.

But at 30, with her boyfriend, she realized with a jolt of clarity that he was never going to be the right man to have children with, and that if she potentially wanted to do it herself at 35 it was time to start planning.

She started researching single motherhood, reproductive technologies, sperm banks. She began her system of putting money aside every month. And she largely stopped dating as her fertility plans became the focus.

At 34, she felt ready, made an appointment with a doctor, and started the process.

Following is the journey she took toward motherhood after that:

My initial tests were all great and my doctor felt confident I could get pregnant quickly. The only initial snag was my cycle was very irregular, so I had to start with Clomid right off the bat.

Over the course of about a year, I did 6 IUIs, all with negative results. It was hard, that first year, because I went into the process with such optimism and such great test results. I knew the stats because I’d done all the research, but you still always hope you will be the lucky one to succeed on the first few tries. After all, my mom had 6 kids and never had to try longer than 3 months for any of them. I’d hoped to be like her.

After the 6 failed IUIs, my doctor wanted to do laparoscopic surgery to check for endometriosis. I agreed and sure enough, she found it and removed it. It was a fairly mild case, so she couldn’t tell if that had been what was stopping me from succeeding. As soon as I had recovered, we tried a 7th and final IUI. This one was such a disaster that we never even made it all the way – my body didn’t even respond to the drugs.

That was a serious blow! I had such high hopes after the surgery, and to have them dashed like that was pure torment. At this stage, my doctor decided we needed to get more aggressive and that is when I moved to IVF. I was just about to start the injections for my first cycle when something happened to me.

I have struggled on some level with anxiety since childhood. I always found ways to keep it under control, but for the first time, I couldn’t rein it in anymore. One day, I had a severe anxiety reaction to a situation, and for some reason, I couldn’t control it. It built and built and built until finally my acupuncturist, recognizing it for what it was, referred me to an anxiety clinic for help. It was then, after more than a year of fertility drugs and treatments, that I was officially diagnosed with Obsessive Compulsive Disorder.

The first thing I did was stop my IVF cycle. I was not in a position to have a baby at that time. As hard as it was to do, I put my fertility attempts on hold for more than six months to come to terms with OCD and learn how to manage my thoughts. It was a long journey, but after I was armed with newfound knowledge about how to manage my anxiety, I finally felt I was ready to try again.

An friend of almost 20 years came back into my life after living abroad for five years and, on learning what I was doing, offered to be my sperm donor. I had been using anonymous sperm until then, but there were benefits to using a known donor, so after some deliberation we agreed to try.

My first IVF was stressful, but I weathered the storm and got pregnant! I can still remember running around my mom’s living room waving the pee stick in her face shrieking “It’s positive! It’s positive.”

My first ultrasound came and I strode confidently into the room — only to have the doctor take a look, frown, and tell me my baby had a heartbeat but was too small. He was 99% sure I was going to miscarry. Thus began a month of horrible. Ultrasounds every week. The heartbeat continued (poor little thing was determined) but the embryo never grew in size.

Around week 9 of my pregnancy, all doctors concluded that any hope had disappeared. I was given the option of waiting for my body to expunge it naturally, to go in for a D&C, or to take some pills at home to start the process. I opted for the pills and went home. My miscarriage happened on Mother’s Day 2012. At my check-up later that week, they discovered some blood vessels had been left behind. I was wheeled in for an emergency D&C.

In the weeks that followed, I largely refused to get out of bed or even remotely live. I went into a severe depressive state, refused to eat, refused to move, and refused to talk about it. All I did was sleep and cry on repeat.

Slowly, I came out of my depression and re-entered my life — but it was a lonely existence. I didn’t know how to act around my friends anymore, especially those who didn’t know what had happened. And it was hard to be around family too. Since I had started trying, three of my siblings had successfully conceived and birthed their daughters — and just a few weeks after my miscarriage, I found out that my brother and his wife were pregnant with their number #2. My sister and her husband soon followed. It was a lonely time for me, filled with a lot of hurt, anger, and increased anxiety.

Eventually I came to a point of acceptance, and felt ready to move on and try again. About seven months later, I braced myself and went in for IVF #2. I got pregnant again, but my fears about what could happen were well-founded. It was exactly like the cycle before — there was a heartbeat, but it was slight. After multiple ultrasounds, it was found that the heartbeat had stopped. The miscarriage came in week 9.

As devastated as I was, this time I was determined not to go through this one alone. So, I came home from the hospital and told EVERYONE EVERYTHING — about the miscarriages, the years of trying, the struggles I’d been through, and the anxiety disorder I’d picked up along the way.

The response was amazing. The support I received was overwhelming, and it helped me get through the entire process. Friends who had also been through miscarriages or infertility struggles shared their stories with me. Friends who had no idea what I was going through offered to take me out for an evening of fun to get my mind off it.

I again took time off to recover, but also to take a long look at what I wanted to do. I took some well-needed vacation time and headed on my dream trip to Iceland and Greenland. It meant dipping into my baby fund, but it was so worth it.

During the trip, I was finally able to envision a life for myself without motherhood — something I had been unable to do since my journey began. I had three frozen embryos leftover from my second IVF. I decided to try one last time for a baby. If they didn’t work, I would walk away with no regrets and start a different life for myself.

I felt great about this decision until tragedy struck again. The day before I was to start my meds for the frozen cycle, my known donor came to me and told me he had met someone he was interested in. Initially I was happy for him, and then I was filled with dread as he continued to talk.

Upon agreeing to date, he had told her about me and what he was doing to help me. She couldn’t accept it and told him flat out if he wanted to date her, he had to stop helping me. In the end, my friend of 20 years chose her over me.

This was a blow, not only to our friendship, but also because he refused to let me use the embryos. I had no choice but to sign the paperwork to have them destroyed. This was more heartbreaking than even my miscarriages had been, because the embryos who had miscarried had not been viable — these embryos were still full of promise.

I broke down when signing the paperwork. The nurse at the clinic took me into another room and held me for what felt like an hour. She brought in the lab manager who agreed to send me a picture of the embryos before they were destroyed, so I would have a reminder of my babies-who-might-have-been.

It was yet another tough stage in my journey, but my recovery time was the quickest yet.

I knew there was no way my fertility journey was going to end like this. So I decided to do one more IVF. I went back to my original anonymous donor, and once again started the process.

My last IVF was both a failure and a success. A failure in that I did not get pregnant, but a success in that I produced nine quality embryos, seven that were ultimately frozen.

A few months after the failed IVF, I did my first frozen embryo transfer (FET) with two. I got pregnant for the third time. This time it stuck!

I can remember that first ultrasound, when my doctor told me everything looked great. I didn’t even believe it. I told her to doublecheck, just to make sure. But she was sure, everything was exactly what it should be. And same thing with the next ultrasound … and then the 21 week ultrasound … and every other check since then.

I am now 7 months into my pregnancy, and other than morning sickness that won’t quit, everything is perfect.

I am not without worry or concern, but I feel like I am now like every other woman who gets to this stage. I am no longer “broken” or infertile or a mystery to my doctors. I am just your average pregnant woman in her third trimester who can’t wait to meet her child.

Mikki’s Note: And meet her child she did. Several months after I met Merewyn, then pregnant, with her very happy mother beside her at our Seattle Choice Moms networking event, sponsored by Seattle Sperm Bank, she gave birth to this angel, now several months old. Truly one of our Choice Kids… 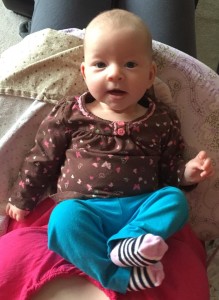