When choosing a sperm bank, many parents focus on finding a donor with specific characteristics, but don’t pay as much attention to the policies of the bank. This could have a profound impact on the family and the child someday.

Do not pick a bank simply because it is the one recommended by your doctor (who might merely have the clinic’s paperwork or a sperm bank’s marketing materials in mind). Before you settle on a sperm bank, research its policies so that you can be assured it is one you will be happy with for the lifetime of your child. 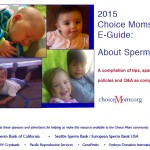 The 2015 Choice Mom E-Guide: About Sperm is a 37-page guide that features policy differences, and features a comparison chart of prices, features, and links to more than 10 sperm banks. It profiles four banks in particular who are friendly to Choice Moms and lesbian couples. It includes a new section about how women chose their donor. It includes, among much more, the insights below.

Do not miss this highly popular Choice Chat podcast — more than 2,000 downloads already — which talks about what anyone should know before choosing a sperm bank.

I consulted with Alice Ruby, of non-profit The Sperm Bank of California, to learn how to make an educated choice about which sperm bank to use. Banks differ significantly in many important areas:

1. What kind of open-identity option do you want?

Each bank has its own policies regarding what information they release, if and how donor information is maintained over the years, and how much support it provides for youth, donors and parents before and after birth. Many parents have reported disappointments, particularly if a child has become sick and the bank is unwilling or unable to find the donor to provide clues. Some banks are slowly changing policies to address some of these issues. Others are not.

Be direct in asking questions: Any sperm bank should be able to answer questions about whether and how it communicates with its donors over time, both anonymous and open-identity, and what the experiences of its families have been like so far.

2. How does the bank track outcomes?

After sperm vials are shipped, there is very uneven reportage of how many pregnancies or live births result. Some banks are much stronger than others at tracking this data. Only an estimated 40 percent of parents report a birth after the fact. Doctors don’t always do the paperwork either. If there is a reason to make contact after the fact with families that share a donor’s genes, currently it is nearly impossible to do so in a comprehensive way. It becomes difficult to measure the actual success rates of a donor’s sperm: what is the miscarriage rate, inherited birth defects, live births? Limits on donor offspring (see below) also become rather meaningless without these reports.

3. Are you comfortable with their policy on offspring limits?

There are no regulations that require sperm banks to limit the number of offspring per donor. The American Society of Reproductive Medicine recommends no more than 25 offspring per population of 800,000. But since all U.S. sperm banks ship nationally, this doesn’t offer a significant limit. Some donors are known to have 50 offspring. Others are estimated to have as many as 150, based on how many years they donated (each donation is split into multiple vials).

Having a donor with proven pregnancies is a plus, but some women are uncomfortable not knowing exactly how many live births have been the result, especially since they don’t know what cities they live in.

Each sperm bank will have a policy on its donor limits, and should be able to explain how they keep track of this. The Sperm Bank of California is one of the tightest ships in the business (it is a non-profit program), with no more than 10 families built from one donor (allowing for the fact that some families will prefer to have siblings from the same person) before he is retired from the program.

If an open donor is used, of course, he is likely to be much more cautious if the offspring is the 10th, or 30th, to contact him.

4. NOTE: There is NO general regulation of this industry.

The Food and Drug Administration provides some regulation, but its rules are primarily about safety protocol designed to prevent disease transmission, not related to factors that might come into play after a child is born. The nationally recognized accrediting organization in the U.S. is the American Association of Tissue Banks. Accreditation by the AATB is voluntary, and an expensive process for some of the smaller banks. State regulations vary widely and only the New York and California Departments of Health inspect the banks prior to issuing a license.

For any reliable sperm bank, all donors should be: