A thorough exploration of egg freezing, adapted from “What’s a Young Woman to Do?: Update on Non-medical Fertility Preservation,” submitted to the Choice Mom community by long-time supporter Joann Paley Galst, Ph.D.

A politically correct term for social or non-medical fertility preservation — AGE-banking (anticipated game exhaustion; Stoop et al., 2014) — has entered the mainstream. Facebook, Apple, and other U.S. companies have offered to cover the cost of an egg-freezing cycle for female employees.

Age of first pregnancy has continued to rise for women. Many wait too long to consider egg freezing because they:

The Process of Egg Freezing

And, unlike taking a daily pill, freezing one’s eggs is not a quick and easy procedure. It involves: 1) two weeks of self-injections, 2) the removal of eggs from the ovaries with the woman under sedation, 3) quickly freezing the eggs in liquid nitrogen, and 4) placing them in storage until the time when she chooses to use them.

If she does return for her eggs, she prepares for a transfer cycle, often with medications. Some eggs are thawed and fertilized using the process of sperm injection (ICSI), as the shell of the eggs hardens due to the freezing process. She goes through a transfer, and begins injecting another medication to support the pregnancy.

It’s a “leaky” process as well, as some eggs and embryos are usually lost at each stage of the process, leading reproductive endocrinologists to recommend that she aim to freeze at least 20 eggs to give her a reasonable chance of one take-home baby.

What do we know about AGE-banking?

Methodology: The methodology keeps improving. Vitrification offers a fast freeze with extreme cooling rates, avoiding the formation of ice crystals that caused cellular damage to the eggs in the past. Clinical pregnancy rates have been reported at almost four times higher in eggs frozen by vitrification, compared to the older method of slow freezing (Glujovski et al., 2014). There are no significant differences reported in live birth rates between fresh or frozen eggs (Kushnir et al., 2015).

Success Rates: The “take home baby” statistic is of greatest interest to women. The age at which a woman freezes her eggs remains an important predictor of success (Rienzi et al., 2012; Ubaldi et al., 2010). Clear and concise information is difficult to abstract from available literature as there is quite a range reported:

Thus, freezing eggs in her late 30’s may not offer women the security they seek.

When is the best time for a woman to freeze her eggs?

That depends on what is most important to a woman. Devine et al. (2015) created a mathematical model based on the records of 900 women.

They found that a woman needs to be under 39 years of age for egg freezing to be cost effective relative to undergoing multiple rounds of IVF at this older age.

Mesen et al. (2015) found that egg freezing provided the greatest improvement in the probability of a live birth compared to no action, when performed at 37 years of age (51.6% vs. 21.9%).

The highest probability of a live birth occurred when egg freezing was performed at under 34 years of age (>74%), but was most cost effective at age 37, at $28,759 per each additional live birth in the oocyte cryopreservation group.

Thus, in general, it appears that it is best to freeze before age 37.

There are some risks, though infrequent, of undergoing oocyte cryopreservation (e.g., pelvic and abdominal pain; injury to the bladder, bowels, or blood vessels; pelvic infection; damage to the ovaries; and ovarian hyper-stimulation syndrome).

Perhaps the greatest risk, however, is for a woman to be given false hope that leads her to put off childbearing.

Discovering later that none of her frozen eggs produced a baby when she returned to use them may mean that she missed her reproductive window of opportunity to become pregnant with her own eggs.

No differences have been found between the use of vitrified or fresh eggs in the rates of obstetrical problems (including gestational diabetes, preterm births, gestational age at birth, APGAR scores, natal anomalies, birth defects, admission to a neonatal ICU, or perinatal mortality) (Cobo et al, 2014; Noyes et al., 2009).

Nevertheless, long-term studies on safety for children born from this process are not yet available, there being only approximately 2,000 babies born worldwide from cryopreserved eggs.

And, regardless of the age when eggs were frozen, health concerns do remain for women becoming pregnant later in life (higher risk of high blood pressure, gestational diabetes, placenta previa, miscarriage, and early delivery because of preeclampsia) than for younger pregnant women.

ICSI is also related to an increased chance of passing on genetic problems because of embryologist-selection for insertion, rather than allowing a natural selection process in fertilizing an egg.

As many women on the Choice Mom path know, it can be a lonely and disquieting place to realize that you have no partner and, perhaps, life is not going exactly as expected. Information about limited ovarian reserve might be very disappointing news. It can be an emotional tailspin for many women, who wonder what this information means to her. Soul searching questions can include:

Egg cryopreservation doesn’t offer guarantees. It is more accurate to consider it a gamble or wager. Maybe you’ll win, and maybe you’ll lose.

For truly informed consent to freeze her eggs, a woman needs:

If payment for egg freezing is offered by her employer, she needs to know: 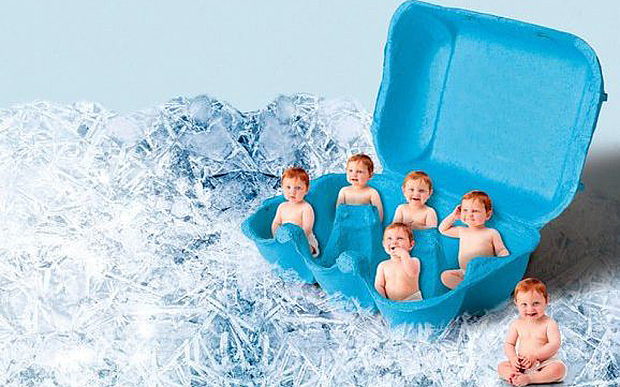 Image from The Telegraph (U.K.), “We haven’t cracked egg freezing”

What can be done to preserve fertility?

Both women and men need to be aware of the impact of age on fertility. Egg freezing does not offer insurance of a take-home baby.

Rather than being thought of as an alternative to reproducing at a younger age, it should be viewed as a possible alternative to using a donor egg when age-related infertility is later encountered (Mertes, 2013).

One reproductive endocrinologist has been quoted as telling his patients to freeze their eggs, but pretend they didn’t, thereby hoping they won’t delay starting their family on account of frozen eggs (K. Oktay in Rabinowitz, online).

Other researchers recommended that a woman not consider cryopreserved eggs as an alternative to conventional reproduction, but rather as a backup if all else fails and her biological time runs out (Cobo et al., 2014).

A national registry to collect data on outcomes would help in accomplishing this goal.

Even with transparency, egg freezing opens up ethical questions:

Although there can be some advantages to older motherhood (e.g., fewer financial worries, less concern about pursuing personal or career goals, greater engagement in parenting), there are also disadvantages (less energy, more likely to have health issues when the child is still a young adult, children could be deprived of social contact with grandparents). Children can be harmed if they do not have at least one parent to guide them into adulthood.

Women’s reproductive choices may not be voluntary — being shaped by our current social structures which shape and confine women’s reproductive options. Until this changes, men and women may continue to find their lives unfolding in ways that result in delayed parenthood.

Egg freezing does nothing to correct the fundamental social injustice in the workplace, where women are effectively forced to choose between having a career and having a family — a choice not imposed on men. Better maternity leave, more flexible policies, and better childcare options could transform the workplace, such that career and parenthood would not conflict for women.

The egg freezing decision requires a complex individual calculus that takes into consideration your age, likelihood of success, future intentions to start a family, finances, and both the potential for physical and psychological risks of undergoing the procedure.

It must not be oversold, as it is not a guarantee and women should not overlook other variables that impact their health and fertility. The impact of egg freezing on women’s reproductive autonomy, the family, and the workplace remains to be seen.

Nevertheless, we must all remember that fertility is precious and, since it does not last forever, it must be valued, preserved, and used in a timely manner.

However, knowledge, not fear, will result in the best choice of when and why to have children.

Joann Paley Galst, Ph.D. is Co-director of Support Services and Chair of the Mental Health Advisory Council of the Path2Parenthood, formerly the American Fertility Association. She is a psychologist in New York City specializing in reproductive health issues including infertility, pregnancy loss, and pregnancy termination after the diagnosis of a fetal anomaly, and is a past chair of the Mental Health Professional Group of the American Society for Reproductive Medicine. She has written extensively in the fertility field, is a co-author with Judith Horowitz, Ph.D. and Nanette Elster J.D., of “Ethical Dilemmas in Fertility Counseling,” and co-edited, “Prenatal and Preimplantation Diagnosis: The Burden of Choice,” with Marion Verp, M.D.

Joann Paley Galst is a long-time supporter of Choice Mom resources. Find more from her here:

Daniluk, JC. “If we had to do it over again…” couples’ reflections on their experiences of infertility treatments. Family Journal: Counseling and Therapy for Couples and Families, 2001; 9(2): 122-33.

Rabinowitz, A. Why egg freezing is an impossible choice. Nautilus, downloaded 11/15/15 http://nautil.us/issue/22/slow/why-egg-freezing-is-an-impossible-choice

The Practice Committee of the American Society for Reproductive Medicine. Obesity and reproduction: a committee opinion. Fertility and Sterility, 2015; 104(5): 1116-26.

The Practice Committee of the American Society for Reproductive Medicine. Smoking and infertility: a committee opinion. Fertility and Sterility, 2012; 98(6): 1400-6.

The Practice Committee of the American Society for Reproductive Medicine and the Society for Assisted Reproductive Technology. Mature oocyte cryopreservation: a guideline. Fertility and Sterility, 2013; 99(1): 37-43.

Tymstra, T. ‘At least we tried everything’: About binary thinking, anticipated decision regret, and the imperative character of medical technology. Journal of Psychosomatic Obstetrics and Gynecology, 2007; 28(3): 131.