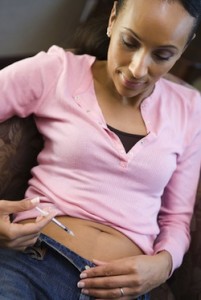 A woman undergoing frozen embryo transfer posted on the Choice Moms Over 40 discussion board, wondering if there were any tricks women have used to help with the fertility injections. “How the heck do I get over my fear of giving myself the intramuscular shots of Delestrogen and Progesterone??”

Here is some of the response:

One woman asked: “Wish I had known this…. I did 4 IVF cycles and one FET, and although all the embryos were of excellent quality, nothing ever stuck. I had also been told that the progesterone inserts would prevent menstruation, but mine would start even while on it… could that be an indication that I was not absorbing them well?”

For a response to that from Choice Mom adviser Dr. Rani Abbasi of Columbia Fertility Associates (D.C.), see this post.

Choice Mom E-guide: All About Eggs