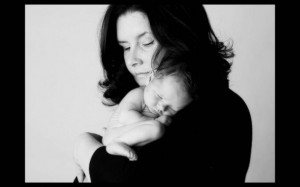 This is not uncommon: A woman in her late 30s realizes that her partner sincerely does not want to have children. What does she do? Many women have joined our Choice Mom community to help make this tough decision.

One such 39-year-old woman recently posted of her own dilemma. “I am scared that I won’t be able to do this alone, but reading your stories [on ChoiceMoms.org] has given me courage. I am also scared to regret leaving a person I love deeply and had hoped to spend my life with. Have any of you ladies left your partner to experience motherhood? Do you have any regrets or advice? Did any of you worry about not liking being a mom?”

Here are some of the replies she has gotten…

Choosing Between Romantic and Maternal Love

“I was also with someone that was the love of my life, and I thought I was going to spend my life with him. We hadn’t got married though, but were together for over two years and deeply in love. And to be fair, it was an intense and turbulent relationship, but the baby issue broke us. When we got together, he had expressed keenness to be a father, but when I brought it up about a year into our relationship, he was unsure. He was 45 and felt that it was too late for him to start. We went back and forth on that issue for several months, and then finally broke up. I went straight to a local fertility clinic and got my tests done.

I hated the fact that I had to choose between romantic love and maternal love. It was a gut-wrenching decision. But as I realized, I will find romantic love again, possibly even a better one than the one I walked away from. But, my window to have a baby is small (I am 42). I have had one IVF cycle so far and while it went really well (I had 4 great looking embryos on day 3), it did not result in a pregnancy. That was hard… Life is complicated, girlfriend! I will say this though —

the love that one feels for one’s children is unconditional love. Romantic love, by its very nature, is simply not. In fact, it is very conditional. The real gold though is in finding/creating unconditional love in one’s life, and that’s what I am after.

Trying to Make It Work for Three Years

While my experience isn’t as nearly as profound as yours, I did try to make a relationship work for the better part of three years with a man who never wanted kids. I knew I wouldn’t change my mind; he tried to change his but couldn’t, and we eventually had to make a clean break and cut off all contact because it was so painful. I ended up adopting my son after eight failed IUIs, and I’ve recently been matched to adopt a second baby boy. I can’t imagine not being a mom! I don’t have a flicker of regret in my heart, even on days where none of the poop or pee lands in the potty. :)”

When I was in my 20s I got engaged. Having a family was the one thing I wanted more than anything, and after we got engaged this guy said he didn’t wanted kids. He had never said anything like it before and I assumed that we were still too young and eventually we’d have them, just not now. A little further on in our engagement, he said he NEVER wanted kids. By that point I was committed to him emotionally and told myself that he’d come around. I convinced myself this was just a phase because he was a young guy. I was wrong.

I wasted 5 years in a relationship with someone who was not right for me because being a mother is the one thing that I wanted in life more than anything. I say wasted because in that time, even though we had a good relationship, I was unavailable to anyone else that might be a good match, and I feel like I spent the time of my life when you are supposed to have the best chance of meeting that life partner, with the wrong person… I became a single mother by choice to my twins at 39. It took four long years and ultimately an embryo donor for me to be a mother. It’s not an easy job but I love it.

Meeting Someone at Age 38

I met my then-boyfriend when I was 38, after thinking I would do the solo child route. After many ups and downs, moving in, getting engaged, and him going back and forth on having kids, I said enough is enough. At my age, I couldn’t afford to waffle anymore. (I am 45 now). Long story short, I now have an amazing 7-month-old girl. I will never regret this decision, but I would have regretted missing an opportunity to have a child, or at least try… As much as it hurt to leave him, I wanted a child more. Aside from the child issue, we had a great relationship and loved each other very much. But that wasn’t enough for me.

He Knew Me Better Than I Knew Myself

I met the love of my life when I was 28. Our one glitch was kids. He did not want them, and I did. However, as our relationship grew, I saw a life without being a mother, and I started to like that life. One morning after we’d been on a huge trip with 50 close friends and family, he said he wanted to break up. He said, after seeing me with everyone else’s kids, there was no way he could deny me a child, and he knew without a doubt fatherhood wasn’t for him.

Fast forward five years. I’m 36, in trying-to-conceive mode, was in the two-week-wait (after a first miscarriage) when out of the blue I got a text from him. We met for breakfast and sparks flew. I learned the next day that I was pregnant. We dated for the next four months and he rushed to my side when I miscarried again and was there for me during my grief… but after that, he left again. This time, the grief of losing him wasn’t as bad, and I held onto how amazing he was during my early pregnancy and through the loss. I knew this time he left for good. I was sad, but I also knew after being pregnant that he was right — I needed to be a mom. He had known me better than I’d known myself.

I haven’t spoken to him in nine years now, and every time I drive by the exit for his house I want to detour and introduce him to my now 3.5-year-old son.

The thing that hit me the hardest after he left the second time was going through additional miscarriages alone. After having him there with me through the grief, doing it solo seemed twice as hard. I had 6 miscarriages before I adopted my son… So yes, I get it. And I’ve dated. And though I’ve had some serious relationships, I’ve never found anyone like him.

I mourn what we had, but when my son snuggles up and crazy-kisses me awake in the morning, I know my ex made a very hard choice so that I could be a mom.

One last point. In retrospect of my six years trying to conceive, I realize that every heartache prepared me to be a better mother. I knew from the day we met, we were family. It was a long and bumpy foster-care road to his adoption — and had I not learned what I had during my TTC years, I would not have been ready for him, or open to adopting a special needs child — but I wouldn’t change it for the world. Good Luck — and know that you can weather the storm, and emerge sparkling in a fresh new way you never knew was possible.

Your Values Are Seriously Different

After we had tried for many many many months to get pregnant, my husband declared that he did not actually want to be a father. At the age of 38 I knew what I had to do. I now have a beautiful baby boy who is one year old.

It’s going to hurt to leave. But it’s totally worth it. And I have to say, I think that if he doesn’t want children and you really do, that is a huge flag that your values are quite different. That is what ultimately helped me let go of my relationship with my husband.

We weren’t married, but we loved each other. We discussed it several times — everything else was great, but we were stuck. We couldn’t move forward in the relationship because he really did not want to be a father. And so we made the painful decision to break up. I was a wreck. At the time I was 37 and wasn’t even sure I could have children. How tragic would it have been to lose the love of my life if I couldn’t even have kids. But I had to try… So here we are, I’m now 41, rocking my 15-month-old baby girl back to sleep. She is undeniably the true love of my life.”

A Response to the Responses

The original writer responded to the Choice insights: “Thank you all so much for sharing your amazing stories. I am truly touched that you all have reached out to me in my darkest hour. I really appreciate all of the encouragement and advice. I’m in tears now reading all of them again for the second time and definitely will be revisiting your responses when I am having doubts. You all are so inspiring and give me hope.”

I am so proud of the strength of so many women on this journey. This is truly the work of our community. 🙂

Confusion: Should I leave my partner?