Embryo donation is the process of using embryos that have been created during an IVF treatment, but not selected for implantation — the couple or individual who has decided they are now done building their family has the choice to donate those remaining embryos for others to use.

Originally, these embryos were largely stored by Christian agencies who did not want to see them disposed of. There were hundreds of thousands of embryos in storage around the United States alone when more attention started being paid to this particular issue.

Many of these agencies wanted to find married couples to use the embryos for their own family-building. In time, however, more agencies began to come into the field, recognizing that embryo donation was particularly helpful to single people and lesbian/gay couples who want to build a family but don’t have both sperm and egg available.

I have long considered embryo donation to be a significant method to motherhood for Choice Moms — particularly older women who are unable to use their own eggs — and am pleased that soon I will announce a partnership in 2015 that will help facilitate embryo donation between Choice Moms.

One tricky aspect of embryo donation is that offspring are full siblings, rather than half-siblings, with children created from the same egg/sperm combination. Do these children have an opportunity to get to know each other? How are you able to be both open about your child’s origin story, while also mediating their curiosity about who else exists in the world “just like them?”

Choice Moms are familiar with having multiple half-siblings created from the same sperm donor, often spread out anonymously around the country. Many of us have joined Donor Sibling Registry to learn more about half-sibling families who sign up to connect, or not connect. Many of us choose open-identity donors to be able to help our children eventually understand more about their donor than what appears in a non-photo profile.

Even the longer-standing tradition of adoption is more open today, recognizing that children grow up to become adults with real questions about genetics and identity that many of us now recognize they have the right to get answered.

Embryo donation still tends to be anonymous — as sperm donation was once upon a time when it was quiet married couples, rather than open Choice Moms and lesbian couples, who dominated the market.

I personally believe that the earlier we create open relationships between embryo donation families, the faster we will resolve some of the questions these offspring will grow up with.

That’s why I heartily support efforts of open Choice Moms to share embryos with other Choice Moms — creating extended families, in a way, with as much care as we have given to sperm donation options. And it is why I look forward to helping our community make it easier to share embryos in the near future. The IVF process is expensive. Waiting embryos are a good method to motherhood.

Making the Choice Between Options

I am putting the finishing touches on a long-awaited and very robust Choice Mom E-guide: About Eggs, which covers egg freezing and egg donation options in a comprehensive way. Once complete, I will turn my attention to the 2015 Choice Mom E-Guide: About Embryos. (Also coming early in the year, a new version of our e-guide to home insemination.)

In the meantime, here is an excerpt from the embryo donation guide. Wise words from Choice Mom supporter Dr. Deborah Simmons, LMFT, Partners in Healing (Minneapolis), who is one of our Top 6 recommended therapists for the community. (Pictured at left with me below.) 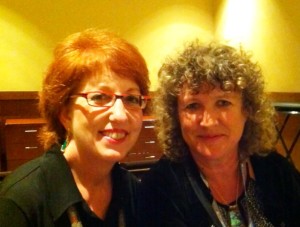 Deborah and I at recent ASRM convention

Q: How can a woman make the choice between using egg donation plus sperm donation, or embryo donation?
A: Using anonymous donor eggs is expensive, but it might offer more choices in terms of a donor’s background. The same could be said for using donor sperm. Some people like to have choices.

Embryo donation is much less expensive than using anonymous donor eggs and sperm. There are a lot of embryos in freezers around the United States. It may look like there are a lot of available frozen embryos, but that is not really the case. After they have conceived children, many “embryo producers” find that they have a hard time releasing the embryos to other recipients.

It is possible to work with good, safe places that have available embryos, including the National Embryo Donation Center and Embryo Donation International. These centers generally offer anonymous arrangements. Anonymity may or may not be an issue for children born in this way, but being as open as possible with your child(ren) is very helpful and strongly recommended.

Some clinics offer frozen embryos that have been released by the embryo producers for donation to other recipients. There are also websites, like Miracles Waiting, in which embryo producers offer their embryos to  recipients. Private donations often bring with it relationships between two households. For some people, those relationships can be very helpful to children. It is important to decide the boundaries between the two households.

What to Be Wary Of

Dr. Simmons went on to talk about the factors to be aware of in embryo donation.

Q: How do you know if you have a good embryo donor?​

Says Dr. Simmons: “There is no way to know if you have a good embryo donor, but there may be some clues, as well as questions to ask.

Ultimately, it is your intuition that will lead you to the embryos that you choose to use.”

Q: How does the embryo donation process work?​

Dr. Simmons responded: “Once you have arranged to secure donor embryos, they generally will be shipped to your fertility clinic, or you will travel to the clinic where the embryos were made and frozen. Your doctor will start you on birth control pills and you will begin to take medication to prepare your uterus to receive and embrace the embryo. (Many clinics are now doing single embryo transfers from donor eggs to avoid multiples).

At around the time of the embryo transfer, you will start taking progesterone supplements, either by intramuscular injection (it goes in your buttocks) or vaginal suppositories. It will be important to have helpers, should you use intramuscular injections.  After the embryo transfer, you will likely have a couple of days of bed rest. If you have a positive pregnancy test, you may remain on progesterone supplements for up to 10 weeks of your pregnancy.”

Much more to come on embryo donation soon!

4 comments for “Navigating the world of embryo donation”