Some of the long-time members of the Choice Mom discussion board are familiar with Stacy’s journey. Years and years of journey. Heart-breaking yet persistent journey.

Back in 2010, she helped women cope with miscarriage, by sharing the story of how she coped with her own. In fact, Stacy suffered through five miscarriages, an emergency hysterectomy, a traditional surrogate who kept the baby, a gestational surrogate who miscarried twins, and an interrupted adoption (that’s where the birth mom changes her mind).

She shared with us on this website the open story about how difficult it is to be the woman who is struggling so long to have a child.

Now, at least eight years into her journey, Stacy shares her update:

On December 30, 2013, I got the news that my surrogate was pregnant after several failed attempts at frozen embryo transfers. After many losses and disappointments, I knew how fragile the journey was. I didn’t dare get too excited. But then again, I couldn’t help myself. I spent the day walking on air, with the prospect that I might be a mother in nine months…

That very same day, sometime after 11pm, I got a text message from a dear friend. We’ll call her My Patron Saint. This friend was very committed to seeing me become a mother. She said, “Wake up and call me now.” I did. She was sitting with Shana*, who had just found out, much to her complete surprise, that she was apparently 28 weeks pregnant.

Shana and I had spoken before, and knew each other in a small way. She already knew she wasn’t in a position to keep the baby. Shana had already decided that she wanted me to adopt the baby. They had both seen my Facebook announcement that my surrogate was pregnant. They asked me, “Are you still interested in adopting this baby?” AS IF! I said a resounding yes about 50 times.

I spent the next hour asking Shana if she was sure. She spent the next hour saying yes. I didn’t know whether to believe it was real, or could be real, but once again, against my better judgment, I was on cloud nine!! I didn’t sleep a wink that night. Could it be? That after EIGHT years of losses and near misses and heartbreaks, I might actually become a mother???? Unfathomable. Thrilling.

Shana didn’t know yet when she was due. She said she’d be in touch once she had a follow up OB appointment. A week later, I got another call. “Are you sitting down??? The baby is due in a month!”

For The Next Month

I stumbled through the next month of my life. Wondering if this dream would come true. Shana texted me periodically to reconfirm her commitment. I scrambled to get my home study updated and jump through legal hoops. All the while, still too scared to believe it could actually be true. I told about five people. NO ONE ELSE. I didn’t want to deliver another disappointment to the world.

Unlike previous times, I didn’t fill the house with baby gear. I didn’t buy any supplies. I didn’t have anything arranged or set up. I hadn’t even told work I might be taking a leave of absence. I tried to dissociate myself, numb myself, try not to feel anything, and just let the time pass as quickly as it could. It was a hard hard hard month.

Shana decided to come to my town to deliver. I was grateful for this. She spent two nights in my home. We got to know each other. We instantly loved each other like family. The bond was strange and lovely and so very special. A C-section was scheduled!!! Three days away.

It was finally time to consider the possibility that this might be real. My friend Michelle came over that night, to talk some sense into me. She told me I needed to sit down and make a list of must-haves. And she dragged my ass to Babies R Us to buy a car seat. She said it was time to believe and time to hope and time to be at least a little prepared!

The night before the birth, I suddenly realized I wanted a doula with me! (I know… A little late to that realization!) I reached out to my friend Kate, and within hours, she was booked to fly in the next day!!! I have so many things to be grateful for, and chief among them are my many amazing and generous friends!!!

I didn’t sleep the night before the birth. NOT ONE WINK. I tossed. I turned. I watched TV. I didn’t pay attention to what I was watching. I daydreamed about what the next day would bring. I braced myself for heartbreak. I talked myself through hyperventilation. And, I’ll be honest, I took some valium!

One the Big Day

In the morning, my family and I trekked off to the hospital. I sat in the room with Shana, trying to read her face, her body language. Trying to see through her. Trying to believe this was really happening. I also felt this tremendous conflict between the part of me that was so excited to be meeting my daughter — and the part of me that was keenly aware that Shana was preparing to do something monumentally emotionally painful.

Shana was hunkering down inside, bracing for the loss, bracing for the pain, yet written on her face was that she was resolute in her decision. It was so difficult to know that my bliss was coming at the cost of her agony. I LOVED this girl. How could I prevent her from feeling pain without causing myself pain???

We were ushered into the operating room. They wrapped me in two layers of surgical garb and it was like wearing five hefty bags in a hot room with bright lights shining on me. Since my hysterectomy, I get hot easily. So, I was sweating bullets. Plus, I was having an out of body experience. I sat at the head of the operating table, right next to Shana’s face. We looked at each other. We cried silent tears. We smiled. We giggled. I tried not to hyperventilate and she said, “Don’t pass out on me” about fifty times!!!

The surgical team did their thing. We sat and waited. It felt like forever. The big curtain was up and I couldn’t see anything — I decided I couldn’t handle seeing too much of the blood. We heard medical jargon. We heard a well-oiled machine of medical professionals working as a team. We sat and we waited.

During this time, Shana was the bravest soul I’ve ever known. She was calm. She was focused. She was feeling God-Knows-What feelings and staying present and composed and thoughtful. She amazed me. She was watching me for signs of joy. I was watching her for signs of pain. We heard a sound on the other end of the curtain. It sounded like a buzzing. Shana’s face lit up. She looked at me. “Is that the baby crying?” I said. She nodded. Tears ran down the side of her face and she smiled. Still watching for signs of joy from me and braving through her pain.

The nurses waved me over to the baby’s station. They said, “Mama! It’s your baby! She’s beautiful!” They were cleaning her and doing what they do. I sat there in silence looking at this new baby. It wasn’t real yet. Shana was still in the room. I couldn’t reconcile the conflict and I still didn’t know that it was real.

They started to wheel the baby out of the room. They told me to follow. I turned back and gave Shana one last look of everything (gratitude, love, appreciation, sorrow, sympathy) and followed the rolling crib out of the room. Once out of the room, the nurses asked me if my daughter had a name. It was then that I opened my mouth and loud guttural uncontrolled sobs came out. Tears flooded my eyes. A lump choked my throat. I sobbed and sobbed. Right there at the nurses’ station, for all to see.

My sister, who had been waiting in the family waiting room had seen us come out. She came rushing over to meet her new niece. She saw me sobbing and stepped in. “Eliana Jacqueline is her name.” I was grateful because it was a while before I could speak.

We went to the nursery and I sat, for the next countless hours, staring at my new daughter, falling madly in love with her, slowly but surely finding the courage to believe it was real, to hold her, to love her, to claim her as my daughter.

My sister went to Shana’s room to check on her. Shana’s first words to my sister were, “How is Stacy??? Is she happy???”

This is adoption at its absolute most beautiful. My gratitude for Shana knows no bounds. My love for her continues every day. My love for my daughter is the fiercest thing I’ve ever known and it doesn’t matter one single speck that she didn’t come from my body or my genes.

Shana shows her grace and generosity, by telling me whenever we communicate, how happy she is with her choice and what a wonderful mother I am to Eliana. She is the picture of selflessness. I intend to raise Eliana knowing that and loving her birth mother. 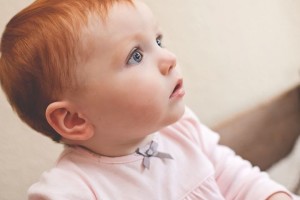 So, on this day, I wish my daughter the happiest of first birthdays. I wish Shana a day of peace and love. I say thank you to God and the Universe for blessing me with this, the sweetest little rascal in the world.

* I’m calling the birth mom Shana in this story, out of respect for her privacy. Shana is Hebrew for beautiful. She is. Inside and out. She will read this, and I hope she knows that it’s as much a tribute to her as it is to my daughter. 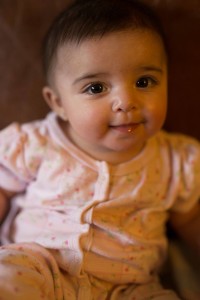 And there’s a big postscript

Stacy’s surrogate did go on to deliver, later that year. Stacy is now also the mother to Selah Rose… her second beautiful daughter.